Danny Elfman is the composer of the music in The Nightmare Before Christmas. In addition to writing the music, Danny Elfman is also the singing voice of Jack Skellington and the voice of Barrel, as well as the Clown with the Tear-Away Face. He has collaborated with Tim Burton in nearly all his other films. Aside from his amazing working with Burton, he has worked on other pieces for other films like some of the newer super hero films.

Danny Elfman has been working in the film industry and also partook in the band Oingo Boingo.

During October 28-30th in 2016, Elfman returned to reprise his singing role as Jack Skellington at the Hollywood Bowl in the Los Angeles Venue, California. He, as well as Ken Page, Catherine O'Hara, and Paul Reubens all returned to sing their old roles from The Nightmare Before Christmas onstage. They were

accompanied with a full choir and orchestra led by conductor John Mauceri. The event was sold out within two days in 2015.

Elfman and Mauceri performed the "Nightmare" score along to the movie. He and the other actors vocalized the parts for their respected characters. According to an interview, the cast was asked to do it again after proving to be a success in 2015. They agreed and thus performed during the Halloween season in 2016.

Danny returned once again at the Halloween at the Hollywood Bowl celebration for Nightmare's special screening in 2018, accompanied by Ken Paige and Catherine O'Hara. The stage was lit with special projection mapping by Mousetrappe, mimicking the façade of the settings and characters in Nightmare for each song. According to the concert producers, they were more than happy to celebrate the film's 25th anniversary.

In 1994, an article was released in Movie Collector(Special Bumper Christmas and New Year Issue) hosting an interview with Danny Elfman called, "Danny Elfman's Christmas Nightmare". The issue talks about his trials with composing the music for The Nightmare Before Christmas as well as his collaboration with Tim Burton. It includes 7 pages filled with images from the movie.

In the bonus feature "The Making of The Nightmare Before Christmas", Elfman began writing the songs for the movie based on discussions he and Tim Burton would have. According to the interview, him and Burton would briefly discuss the next events of the movie while reviewing his drawings, and Elfman would write songs that began the production period for the crew. He and Burton didn't talk too much, as Danny would just get the "gist" of what Tim was saying before hanging up and leaving to go write the songs.

In another interview, he admits he hadn't anticipated doing the singing voice for Jack Skellington. He went to Burton insisting that Jack's role was for him, given how much he related to the character, in which Tim agreed. He enforces his feelings for the character in another interview, claiming that "no one else is going to give their all". He also mentioned that he wanted the movie to be based on the songs, as if they were telling the story through the music.

Danny Elfman visited the Haunted Mansion Holiday at Disneyland to perform a special reading from "Tim Burton's: The Nightmare Before Christmas". 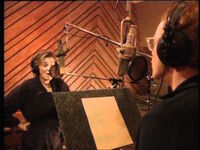 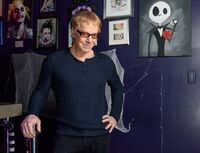 Add a photo to this gallery
Retrieved from "https://the-nightmare-before-christmas.fandom.com/wiki/Danny_Elfman?oldid=15948"
Community content is available under CC-BY-SA unless otherwise noted.