Disney Sorcerer's Arena is an upcoming mobile and desktop game released by Disney and Glu Mobile. It will feature many Disney and Pixar characters in a strategy-battle game.

Assemble your roster from scores of battle-ready characters, each with their own unique abilities and spells to unleash. Dominate foes in the action-packed arena where every choice you make and every spell you cast determines your legacy. Compete in single-player, PVP, and live events as you earn high stakes rewards in this unending quest to be legendary.

The game can be played either single-player or player-versus-player (PVP). Each character is suited with unique skillsets and magical spells, offering many strategic ways to play. The game will feature daily quests and offer rewards and upgrades in order to compete against other players.

The Nightmare Before Christmas Edit

Jack Skellington makes an appearance as a playable hero. He has a role as Support with a Medium range.

25 tokens are needed to unlock him, and he listed with 2 stars. His card can be first seen in the trailer, with his silhouette standing just before the Spiral Hill. Jack later makes an appearance in the game's released trailer, accompanying Stitch against Syndrome and making a pumpkin tower that he hides in. He later shows next to Mickey and Pocahontas at the end of the trailer.

Oogie Boogie also makes an appearance as a playable villain. He is first seen in the game's trailer, standing with the other Disney villains and getting attacked by the heroes. 10 tokens are needed to unlock him, and is listed with one star. He has a role of Defense with a Short range.

Sally makes an appearance in the game as well, getting added to the game for The Nightmare Before Christmas event. 25 tokens are needed to unlock her, and she is listed with two stars.

On December 20th, 2019 through January 12th, 2020, the game featured a Nightmare Before Christmas event where players could earn Jack Skellington tokens, as well as the newly-added Sally. Players could also purchase the exclusive Santa Jack outfit during the event.

They also added the Hinterlands as a background for the PVP Arena Lobby, where players could fight during the event.

Players would need to defeat Oogie Boogie and his allies to earn Sally and Jack Skellington character tokens, and included 7 different battles to play through. 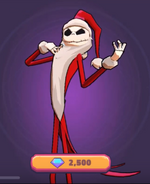 Exclusive Santa Jack outfit
Add a photo to this gallery
Retrieved from "https://the-nightmare-before-christmas.fandom.com/wiki/Disney_Sorcerer%27s_Arena?oldid=14602"
Community content is available under CC-BY-SA unless otherwise noted.