The Easter Bunny is the assumed Holiday Leader for Easter, beyond the Easter-egg door. He is a large, pink bunny with long ears and a fluffy cotton tail. He is initially seen with small, black eyes, but when he becomes alarmed by the Behemoth, his eyes turn wide and, for a moment, can be seen as white. He wears a sash with the words, "HAPPY EASTER" on it, and carries a basket full of eggs.

The Easter Bunny is mistaken for Santa Claus and someone kidnapped him into Halloween Town. When released, he hops out of the bag and sniffs around the Town Hall curiously, before hopping over to the Behemoth and sniffing him. After he exclaims, "bunny!", the Easter Bunny is startled and jumps right back into the bag, shaking in fear.

Jack Skellington orders the trio to take him back before going after Santa Claus again. Jack says he is sorry for the inconvenience, and Lock, Shock, and Barrel most likely take him back to where he came from (Easter Town).

The Easter Bunny is one of the Holiday Leaders Oogie had kidnapped in The Nightmare Before Christmas: Oogie's Revenge. He can be seen with the other Bunnies tied up in a bag and tossed into a cell. The Easter door was taken from the Holiday Trees, but was later recovered by Jack. The door is later returned to its rightful place and the Mayor frees the Easter Bunny back to his own world again. 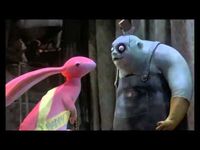 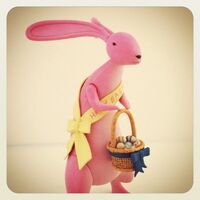 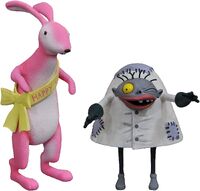 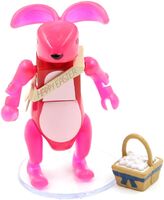 Add a photo to this gallery
Retrieved from "https://the-nightmare-before-christmas.fandom.com/wiki/Easter_Bunny?oldid=15182"
Community content is available under CC-BY-SA unless otherwise noted.