Start a Wiki
The Gate Keeper is a resident of Halloween Town tasked with watching the gate that allows access to the town.

The Gate Keeper did not outright involve himself within the Halloween ceremonies, only opening the gate to allow Mr. Hyde, Devil and Behemoth lead Jack Skellington into the town square. The Gate Keeper then followed behind Mr. Hyde, Devil and Behemoth to rejoice in the Halloween celebration with the rest of the town's residents as Jack rose from the fountain - being shown clapping once the celebration had ended.

Later the Gate Keeper opened the gate to allow Lock, Shock, and Barrel back into Halloween Town. The trio was returning to present an individual they thought was Santa Claus to Jack. To everyone's surprise they had mistakenly kidnapped the Easter Bunny instead.

The Gate Keeper resembles an anthropomorphic raven of sorts, having a long gray beak and a body covered in black feathers. The Gate Keeper wears a beige bowler hat, with a long trench coat and pants to match. He appears to have tiny teeth and hands with four fingers on each. The Gate Keeper was also a rather tall resident of Halloween Town, however his full body is not always clearly visible because he is often seated at his post next to the gate of Halloween Town. 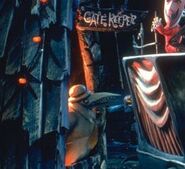 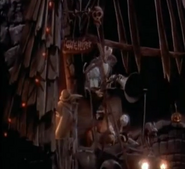 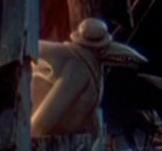 Add a photo to this gallery
Retrieved from "https://the-nightmare-before-christmas.fandom.com/wiki/Gate_Keeper?oldid=13581"
Community content is available under CC-BY-SA unless otherwise noted.