Start a Wiki
The Grim Reaper is the famed mythological being that is in charge of harvesting the souls of the deceased. He carries a scythe and is a citizen of Halloween Town.

The Grim Reaper was first seen in the the crowd during "This is Halloween", then appears at the town meeting, sitting near a strange hooded lady. He is not seen for the rest of the film.

Grim Reaper is based on the mythical creature of death and sin, pain, and suffering. 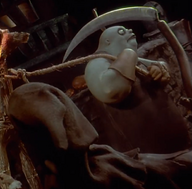 Add a photo to this gallery
Retrieved from "https://the-nightmare-before-christmas.fandom.com/wiki/Grim_Reaper?oldid=14675"
Community content is available under CC-BY-SA unless otherwise noted.