Greg Proops
Harlequin Demon is a citizen of Halloween Town.

He is a monster who has many sharp teeth and three black and orange tentacles on his head. The Demon's upper jaw and lower jaw are completely dislocated from one another and only connected by a single appending in the center of its mouth making its lower jaw have a bowl shape. The creature is covered in feathers and fluff of an orange, green and black color scheme.

Harlequin Demon, like the rest of the residents of Halloween Town, loves to scare others and take part in big events and help out in their preparation. Due to being a monster, he has no trouble with frightening and disgusting things and gladly enjoys messing around with dead animals corpses, however he has very little understanding of nice and pretty things due to being a resident of Halloween Town. He also seems to be skilled at turning rotting animal corpses into wearable hats, even considering himself a genius regarding this task.

During the song This is Halloween he is hiding in the trash can and in the center of town during the festivities that happened after the song. During the preparations for Christmas, he made hats made from dead rats and bats, Making Christmas. He lastly appears at the end of the movie when all of the creatures are confused by the Christmas snow. 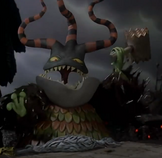 Harlequin Demon making a rat into a hat

Harlequin Demon popping out of the trash can

The Harlequin Demon opening a crate 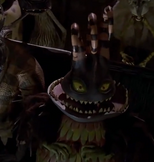 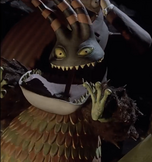 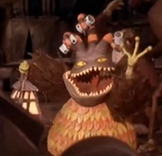 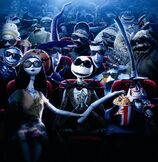 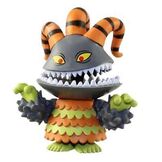 Add a photo to this gallery
Retrieved from "https://the-nightmare-before-christmas.fandom.com/wiki/Harlequin_Demon?oldid=15148"
Community content is available under CC-BY-SA unless otherwise noted.