Enix (originally by Square). It is a collaboration between Disney Interactive and Square Enix, and is under the direction of Tetsuya Nomura, a longtime Square Enix character designer.

Kingdom Hearts is a crossover of various Disney settings based in a universe made specifically for the series. The series primarily centers on the main character Sora and his journey and experiences with various Disney, Final Fantasy, The World Ends with You and Pixar characters, whilst stopping the various incarnations of the primary antagonist Xehanort throughout the series. All characters original to the Kingdom Hearts franchise are owned by The Walt Disney Company.

The series consists of nine games across multiple platforms, and future titles are planned. Most of the games

in the series have been both positively received and commercially successful. As of October 2013, the Kingdom Hearts series has sold more than 25 million copies worldwide. A wide variety of related merchandise has been released along with the games, including soundtracks, figurines, companion books, novels and manga series.

The Heartless start appearing in Halloween Town mysteriously. Jack Skellington has decided to try and train them so they could dance to be apart of the Halloween celebrations. Sora, Goofy, and Donald team up with him to get them a heart so Doctor Finklestein can make the Heartless obey others. The heart gets stolen by Lock, Shock, and Barrel, who end up resurrecting Oogie Boogie. He creates a monster that threatens the Town. Jack, Sora, Goofy, and Donald go on a long adventure to defeat it.

When Sora, Goofy, and Donald visit Halloween Town again, they find Jack Skellington claiming that he wants to take over Christmas again, but needs Santa Claus' blessing. The trio teams up with him after Jack nominates them as his "bodyguards". When they meet with Santa Claus to ask for his blessing, he remarks Sora's previous beliefs that he hadn't existed. He also comments on Jack still wearing his Santa outfit Sally had made him before. Their session gets interrupted, and they are soon informed that Lock, Shock, and Barrel are causing trouble in the Town again. Maleficent orders them around until resurrecting Oogie Boogie, who ends up back-stabbing her later in the game after deciding that she was useless for his plans. Jack, Sora, Goofy, and Donald come and defeat him "for good".

When the trio visit Halloween Town again, they learn that someone has been stealing Christmas presents. They stick with to try and find whoever is stealing them. Jack comes up with a plan to lure the thief to them by hiding him, Sora, Goofy, and Donald in a present in Christmas Town. When they surface, they find that Doctor Finklestein's experiment had been stealing the presents all along. After defeating the robot, Sora contemplates the reason why it wanted to steal presents. Sally comes and informs them all that the purpose of presents isn't what's inside, but act of giving the gift.

Jack as he appears in the Kingdom Hearts series

Sally as she appears in the Kingdom Hearts series 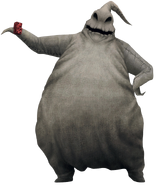 Oogie as he appears in the Kingdom Hearts series

Dr. Finkelstein, as he appears in the Kingdom Hearts series

Lock,Shock and Barrel appears in the Kingdom Hearts series

The Mayor, as he appears in the Kingdom Hearts series
Add a photo to this gallery
Retrieved from "https://the-nightmare-before-christmas.fandom.com/wiki/Kingdom_Hearts?oldid=14869"
Community content is available under CC-BY-SA unless otherwise noted.