Full control of its tentacles

The Man-Eating Wreath is one of the Christmas gifts that Jack gives during his Christmas Eve run.

In the Movie[edit | edit source]

In the movie, the wreath has a small appearance when Jack drops it off at the house of an old woman. After he leaves, it opens its eyes, grows many tentacles, and then the wreath attempts to eat the old lady. But the wreath failed to eat her. It is later taken away by the real Santa Claus, even though it was never seen onscreen.

In the Ride[edit | edit source]

In the Haunted Mansion Holiday, the wreath is positioned in the Corridor of Doors, hanging from the walls. It reaches out to grab guests as they pass underneath. Small vicious, singing flowers have sprouted from the wreath, and are located in different places in the hallway, singing the melody of Kidnap The Sandy Claws. 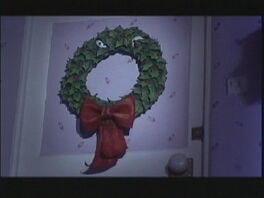 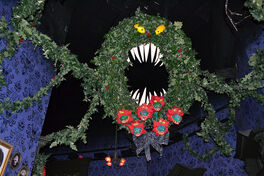 Add a photo to this gallery
Retrieved from "https://the-nightmare-before-christmas.fandom.com/wiki/Man-Eating_Wreath?oldid=15734"
Community content is available under CC-BY-SA unless otherwise noted.