Oogie Boogie's home is an underground lair full of torture devices with a casino-like appearance, as he gambles on human (and in some possible cases, inhuman) lives and keeps the spirit of Bug Day alive. The lighting is done in the style of a cheap fun house, as seen during Oogie's song. It is located beneath the Treehouse of Lock, Shock and Barrel who send food (such as the insect caught during Kidnap The Sandy Claws) and sometimes even victims for Oogie Boogie down a chute.

A few torture devices shown in the movie include a roulette wheel; gun-toting robots; King of Spades playing-card soldiers and a gruesome variety of other demonic contraptions.

The entrance to Ooge's Lair 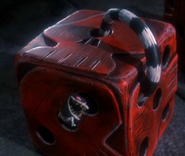 Screen Used Prop of the tunnel that leads to Oogie's Lair
Community content is available under CC-BY-SA unless otherwise noted.
Advertisement