The Nightmare Before Christmas Wiki
Register
Don't have an account?
Sign In
Advertisement
in: Christmas Town Residents, Males, Humans,
and 3 more

While going over his naughty and nice list, he is kidnapped by Lock, Shock, and Barrel, who are under the orders of Jack Skellington. The three take him to Jack, who steals his hat to complete his Sandy Claws outfit. Oogie Boogie then plans to torture him before adding him as spice to his Snake And Spider Stew.

When Oogie is defeated by Jack, he gives him a hefty chewing-out for what he's done, and he magically zips back up the chute he came down by placing his finger on his nose and continues on to salvage a ruined Christmas. He later returns to Halloween Town and makes it snow, which causes the whole town to sing a modified version of "What's This?".

His last movie appearance is him flying in the sky and waving at the town as he returns from saving Christmas. He shouts "Happy Halloween!", and Jack replies "Merry Christmas!". It is said by Stan Webb, the editor of The Nightmare Before Christmas, at the end of the Oogie Boogie song that Oogie was supposed to eat him and after Jack destroys Oogie, he is set free.

The Nightmare Before Christmas: Oogie's Revenge

Santa Claus makes an appearance in the sequel video game, Oogie's Revenge. He is one of the two Holiday Leaders (with the exception of Jack Skellington of course) who hasn't been kidnapped by Oogie Boogie, who has crowned himself as the "Seven Holidays King". But Santa gets tied into a train-contraption when Oogie decides to kill him before getting rescued by Jack. He joins him to chase after Oogie Boogie and is seen after Jack defeats him, where he gets apologized to again for almost ruining Christmas. Instead of reprimanding him, Santa forgives Jack and thanks him for saving his life.

approached by Jack Skellington, who asks him for his blessing when he wants to take over Christmas again. Santa comments on Sora's previous disbelief in his existence, and also comments on the fact that Jack is wearing his Sandy Claws outfit again. Their encounter is interrupted, but when he's seen again, he reminds Sora of Riku and that he can find him again so long as he believes in him, as that was how he found him.

Santa Claus is revealed in Issue #12 and Book 3 of the sequel comic book, Zero's Journey.

He is first seen in his Workshop with his Elves working on his Naughty & Nice list, until he is interrupted by Zero, who barks to get his attention. He mentions that Zero looks familiar and asks what's wrong. He gets his beard pulled by the pup until he eventually snaps and insists that he is "working". However, after Zero comes back and retrieves a ball, Santa decides to play a quick game of catch with him.

When Zero ends up losing the ball, he helps him find it by coming down in the Workshop. The elves are excited to see Santa, and are snapped out of their daze. Zero eventually leads him to a hypnotized Lock, Shock, and Barrel, who he recalls as the "evil children who kidnapped him". He insists he's going to put them on his Naughty list, until the three snap out of it. They remember Santa and start chasing after him, causing him to get hooked by a claw and thrown onto a conveyor belt. He is soon stuck in a gift-wrapping machine unable to breathe. Lock, Shock, and Barrel laugh at the chaos while Zero finds a lever to turn off the machine.

After he is taken out, Santa angrily calls the trio brats, but is calmed down by his Elves. He decides to talk to Lock, Shock, and Barrel, and asks them why they're so naughty. He then asks them what's the difference between good and bad, and after they reply that they don't, he says he believes them. He gets an idea and invites the trick-or-treaters and Zero to the Christmas Eve Banquet. After explaining their traditions, he thanks the Elves for their work and shares a Christmas toast. He gives a special welcome to their guests, and offers Zero the chance to lighting the Christmas tree instead of his head reindeer, Clementine.

Santa waving at Jack before flying back home to Christmas Town 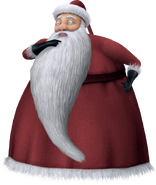 Santa Claus, as he appears in Kingdom Hearts II 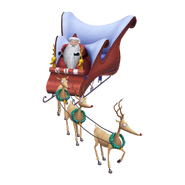 Santa Claus with his reindeer in Kingdom Hearts II 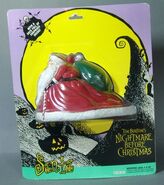