The Scary Teddy or Vampire Teddy-Bear as it is referred to in the poem, is a vampire-like teddy bear with a big open mouth grin and Mickey Mouse-like ears.

Jack Skellington as Santa Claus gave a Scary Teddy on Christmas. It comes to life and flies after a little boy and a little girl until the real Santa Claus returned and replaced the fake Teddy with a normal Teddy Bear. it is often reffered to as some kind of "easter egg" because of it's mickey-like appearence. it is also gifted to a little girl and her younger brother, whom happen to be wearing mickey/donald duck pajamas.

The Scary Teddy is a recurring character in Haunted Mansion Holiday, replacing the raven character from the mainstream ride. It is shown causing mayhem around the mansion. 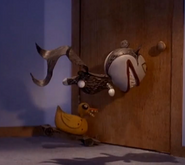 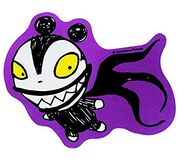 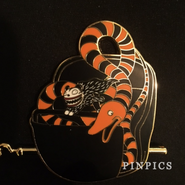 Retrieved from "https://the-nightmare-before-christmas.fandom.com/wiki/Scary_Teddy?oldid=15347"
Community content is available under CC-BY-SA unless otherwise noted.