Edit
watch 01:40
The Sandman Will Keep You Awake - The Loop
Do you like this video?
Play Sound

Unfolds when used as a path, then refolds back into its spiral shape after use.

The Spiral Hill is an iconic landmark incorporated in The Nightmare Before Christmas canon. It stands in the Graveyard of Halloween Town and leads into the Hinterlands. Its form resembles a small rising outcrop of land which curls inwards into a spiral at the pinnacle. When individuals approach seeking access to the Hinterlands, it unfolds to serve as a bridge to that area, facilitating traversing of the Pumpkin Field. 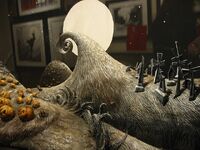