Start a Wiki
"I am the one hiding under your stairs, fingers like snakes and spiders in my hair!"

- This is Halloween (song)

This creature is a character from The Nightmare Before Christmas. He is a citizen of Halloween Town. Unlike The One Hiding Under Your Bed, The Stairs Monster makes more than one appearance in the movie. He has banded kraits as his fingers, four on each hand, and a single spider on his head. He has a small forked tongue, tiny teeth, and the area around his mouth is colored pink. Unlike most the creature appears in the episode "A Bali Mynas Battle", where he appears all over again. Then, the creature was with the crowd sad after Jack was shot down. After that, the creature takes a nap when Jack battles Oogie Boogie and later wakes up after Jack comes back.

The Man Under the Stairs is now above the stairs! 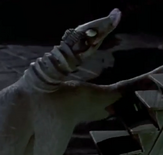 The Stairs Man passing a present up to the Corpse Kid

The Stairs Man in awe 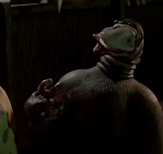 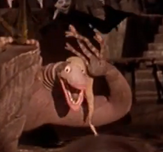 The Stairs Monster in his nightcap.

The One Hiding Under the Stairs 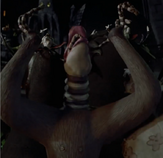 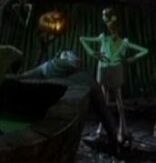 Hiding under your stairs... 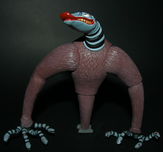 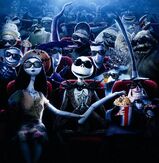 Add a photo to this gallery
Retrieved from "https://the-nightmare-before-christmas.fandom.com/wiki/The_One_Hiding_Under_The_Stairs?oldid=14770"
Community content is available under CC-BY-SA unless otherwise noted.