Tim Burton is the man that sparked the idea for The Nightmare Before Christmas. He is a well known director, producer, writer, animator, artist and generally speaking, a creative genius.

Tim Burton was born in 1958, Burbank California. He began making movies at a young age. After high school, Burton attended the California Institute of Arts to study character animation. After he graduated from the Institute in 1979, he was hired by Disney. Later in his career his old Poem caught the attention of Disney and they decided to make The Nightmare Before Christmas, which was directed by Henry Selick, a good friend of Tim Burton.

His Poem was the birth of Jack Skellington.

Against popular belief, Tim Burton did not actually direct The Nightmare Before Christmas and had little involvement in the film's process. He was busy with the production of Batman Returns, and entrusted Henry Selick with Nightmare, because he did not want to deal with the "painful process of stop motion". He made few trips to the production offices, Skellington Productions, but had his name included in the movie's title because of Disney's belief that it would boost the film's popularity.

"Nightmare has always meant a lot to me." - Tim Burton, 20th Anniversary Edition, The Nightmare Before Christmas.

Burton worked with Danny Elfman by sketching the characters and providing brief summaries of their situations and the Poem's story. Despite not being in his original story, Burton supported Sally's addition by Caroline Thompson and sketched her with Jack and Zero, even including her in the Poem's 20th anniversary edition in backgrounds. Additionally, Burton denied the idea of having a Nightmare Before Christmas-themed ride in Disneyland. He also insisted Disney not go through with making a sequel in belief that it would keep the film's "purity".

"I was always very protective of [Nightmare Before Christmas], not to do sequels or things of that kind. You know, ‘Jack visits Thanksgiving world’ or other kinds of things, just because I felt the movie had a purity to it and the people that like it. Because it’s not a mass-market kind of thing, it was important to kind of keep that purity of it. I try to respect people and keep the purity of the project as much as possible." -Tim Burton 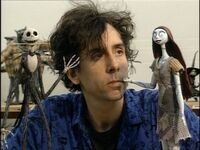 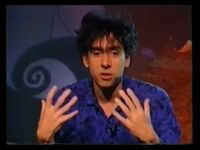