The Nightmare Before Christmas Trading Card Game is an interactive, fast-playing trading card game published by Neca released in 2005. It was designed by Andrew Parks and Zev Shlasinger.

Each player manages their own version of Halloween Town, complete with characters from The Nightmare Before Christmas and its own set of Locales for the Characters to haunt. It also has Creations built by the Characters and Surprises to keep the game full of action and suspense.

Each game lasts for 12 Rounds (the "12 Days until Christmas"), during which time each player creates the scariest version of Christmas they can. The players do this by playing Characters into their own versions of Halloween Town, and by using those Characters to build terrifying Christmas Creations.

At the end of the 12th Day, the player with the most Scare Points in his or her Halloween Town wins the game. 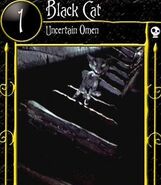 Retrieved from "https://the-nightmare-before-christmas.fandom.com/wiki/Trading_Card_Game?oldid=12521"
Community content is available under CC-BY-SA unless otherwise noted.