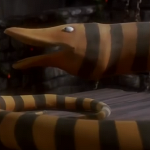 I love The Stairs Man, The Orange Python, and Tim Burton's The Nightmare Before Christmas!

I first watched this movie when I was 6, and didn't actually like it at first, not because I didn't think it was good, but because I was obsessed with Corpse Bride at the time and was angry about this being the more infamous/popular Tim Burton movie at the time- which it still is. (Weird but true reason)

Anyways, a while later I learned to love this movie, and as a child, I was always more interested in background characters rather than the main ones. They seemed more intriguing to me.

"I am the one hiding under your stairs, fingers like snakes and spiders in my hair!"

"Will it bend? Will it break?"

HIS LINES FROM THE DELETED SCENE:

"Inside each box, a mystery, a million ways to fill this thing!"

My other absolute favorite characters include:

(I also really like the creatures seen in Oogie Boogie's lair, such as the snake that comes out of his die and Oogie's own snake "tongue")

I have a few more fandoms I am into, such as:

Retrieved from "https://the-nightmare-before-christmas.fandom.com/wiki/User:SnakesAndSpiders?oldid=8257"
Community content is available under CC-BY-SA unless otherwise noted.